When the famous Syrian actress Azza al-Bahra fled her home, she had no idea she would be starting a new life in Istanbul.

Like many Syrian refugees, she thought she would be returning after a few months abroad.

But with the war inside her country still raging, that seems a distant prospect.

Ms Bahra now presents two programmes for an Istanbul-based radio station which seeks to unite Syrians, rather than divide them along political, religious and ethnic lines.

Alisar Hassan, who like Ms Bahra fled Syria after threats of detention from the security services, set up Radio Sawt Raya with the help of international grants. 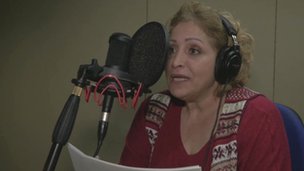 “We want to reach Syrians inside the country who have no Internet and no electricity, and who are under siege and want to know what’s happening,” she says.

In one of her programmes, Ms Bahra recalls significant moments in her life in Syria.

Her other show discusses Syria’s modern history – starting with the Ottoman Empire, followed by the French-mandate era, then independence and short-lived democratic rule before the series of coups that eventually brought the Assad family to power.

“It is a documentary series that talks about Syria’s history, how we enjoyed freedom and democracy and how we aspire to a future that’s even better,” she says.

But like many Syrians, Ms Bahra longs to go back to her homeland.

A political solution is needed, she says, but not one that does not respect fundamental rights.

She believes the proposed Geneva II talks are set to cover up the failure of the international community to end the suffering of the Syrian people.

“The world is using the talks to show they are doing something.”

Ms Bahra says any agreement should not be about one side or the other surrendering; rather it should focus on how the opposing sides are going to put right three years of death and destruction.

Istanbul has a long history of welcoming new arrivals, and since the uprising against President Bashar al-Assad began in March 2011 many Syrians have found it a safe haven. 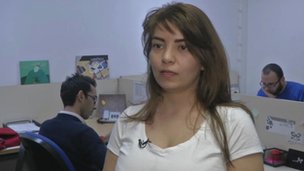 Wherever you go in the city, you seem to come across Syrians going about their daily lives.

There are also many similarities between Istanbul and Damascus.

The spice market in the Grand Bazaar resembles the one in the Syrian capital’s Old City, which bustled with merchants, shoppers and tourists before the war.

A cobbled ally just off Istiklal Street, one of Istanbul’s most famous avenues, is meanwhile reminiscent of Souk Sarouja, an ancient area in the heart of Damascus that is dubbed “Little Istanbul”.

Perhaps unsurprisingly, a cafe in the ally has become a place for new arrivals from Syria to meet, be they impoverished refugees, educated middle class, or wealthy businessmen.

Young exiles meanwhile gather at the Boulivard Cafe to discuss developments back home; some talk about how to resume the activism that forced them to flee to Turkey.

They all have stories of suffering and loss, but are also determined to focus on the future.

Both men took part in the peaceful pro-democracy protests that took place across Syria at the start of the uprising, but left the country after it became too violent and because of the rising influence of Islamist extremists linked to al-Qaeda.

They believe that there must be a way to bring about an immediate end to the fighting and expel the extremists from Syria.

Almost all the Syrians you talks to in Istanbul support the Geneva II initiative, especially if it will end the violence and allow them to return home.

But they also have one demand that is non-negotiable – President Assad must step down.

Patriots in Turkey to be switched as part of routine rotation